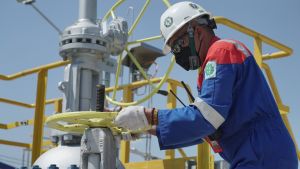 The reliability of PT Rekayasa Industri (Rekind) through its involvement in the Gas Processing Facility (GPF)-Jambaran Tiung Biru (JTB) Project has been proven again. This national EPC company made another achievement through the competition in the pre-commissioning stage of Buyback Gas in the national strategic project. The activity carried out on Thursday (30/9) was the commissioning stage of the EPCC (Engineering, Procurement, Construction and Commissioning) process of this project. Involving hundreds of Rekind experts and professionals in their fields, so that this stage is a success. The Buyback Gas stage itself has a strong correlation to determine the success of other strategic stages in the PT Pertamina EP Cepu (PEPC) project. The procession of activities, which started at 10.00 WIB, was witnessed by PEPC General Manager Charles Harianto Lumban Tobing, Budi Prianto – Project Manager (PM) GPF JTB, Heri Budiman Deputy PM GPF – JTB and Sabilal Arif Construction Manager (CM) GPF – JTB.
“For those of us on the project site, the success of this activity brings pride. In addition to showing Rekind’s strong commitment and professionalism, this stage is very decisive in the completion of project activities. And thank God, everything went smoothly, according to what we all hoped for,” said Budi Prianto, Project Manager of GPF – JTB. 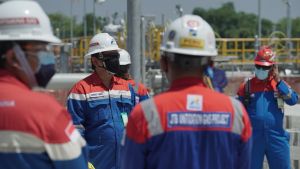 The definition of Buyback Gas in the milestone of achieving this stage is to take clean gas purchased from PT Perusahaan Gas Negara (PGN) in a very small amount capacity, to then flow it as a starting power boiler and Gas Turbine Generator (GTG). Boiler is a device for converting water into steam through heating, where the water vapor can be regulated how strong the pressure is so that it can be used as motion power. While the Gas Turbine Generator (GTG) is a generator engine in which the turbine / engine player is driven by clean gas purchased from the Pertagas. If the gas flow is able to drive the boiler and GTG, this gas is used as power to drive large motors, one of which supports the chemical cleaning process. This process is part of the focus of its activities on cleaning the towers, namely the Absorber and Selexol Regenerator. “All the towers must be cleaned with chemicals whose driving motors are supplied with electricity from GTG,” said Gito Waluyo, Deputy Project Manager of GPF-JTB.
Prior to Chemical Cleaning, the steam generated from the Boiler serves to clean the gas line pipes that use pressurized steam through steam blowing. After cleaning, adaptation or adjustment is carried out, then this GTG is used to supply power during chemical cleaning. “So the milestones from Buyback Gas are for chemical cleaning,” continued Gito Waluyo. If the chemical cleaning process has been completed, it means that GPF JTB is ready to operate, especially after the entire pipe is cleaned using flushing and blowing. After cleaning everything, the instrumentation system and shut down system are checked. After all have fulfilled the plan, proceed with the simulation process. So the gas pipeline operation is ready to run.
Actually, for this stage, in moving the boiler and GTG can use diesel fuel as another alternative. But the costs that must be incurred are quite large and the diesel used is not arbitrary and the quality must be guaranteed. That’s why gas is chosen which in addition to being more efficient, cleaner (eco-friendly) is also relatively cheaper. “Even so, trials at the stage using diesel have been carried out. The results are also very good and according to the plan, “said Budi Prianto. 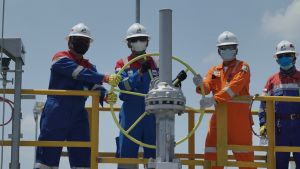 If the boiler and GTG are running normally, it is hoped that the next stage will be even smoother because the Buyback Gas and also the power/electricity generated from the GTG will be able to be used for commissioning other units such as Compressor, Fin-Fan Cooler and Heater. The JTB factory itself will specifically process raw natural gas into clean gas with sulfur, water and carbon dioxide gas content that is according to specifications. The compressed gas is then flowed as sales gas to the Pertagas pipeline.
In addition to producing clean gas (sales gas), the JTB Plant will also produce by-products that can also be used or sold, namely condensate and sulfuric acid.
The involvement in the GPF-JTB project shows Rekind’s real role in supporting government programs, especially in terms of the utilization of gas resources. “In the end, all of these processes will lead to supporting the country’s economy through the fertilizer industry in particular, by distributing gas to fertilizer factories which are one of the pillars supporting national food security,” he added.